Nuclear reactions induced during high-energy radiotherapy produce secondary neutrons that, due to their carcinogenic potential, constitute an important risk for the development of iatrogenic cancer. Experimental and epidemiological findings indicate a marked energy dependence of neutron relative biological effectiveness (RBE) for carcinogenesis, but little is reported on its physical basis. While the exact mechanism of radiation carcinogenesis is yet to be fully elucidated, numerical microdosimetry can be used to predict the biological consequences of a given irradiation based on its microscopic pattern of energy depositions. Building on recent studies, this work investigated the physics underlying neutron RBE by using the microdosimetric quantity dosemean lineal energy (yD) as a proxy. A simulation pipeline was constructed to explicitly calculate the yD of radiation fields that consisted of (i) the open source Monte Carlo toolkit Geant4, (ii) its radiobiological extension Geant4-DNA, and (iii) a weighted track-sampling algorithm. This approach was used to study mono-energetic neutrons with initial kinetic energies between 1 eV and 10 MeV at multiple depths in a tissue-equivalent phantom. Spherical sampling volumes with diameters between 2 nm and 1 μm were considered. To obtain a measure of RBE, the neutron yD values were divided by those of 250 keV X-rays that were calculated in the same way. Qualitative agreement was found with published radiation protection factors and simulation data, allowing for the dependencies of neutron RBE on depth and energy to be discussed in the context of the neutron interaction cross sections and secondary particle distributions in human tissue. 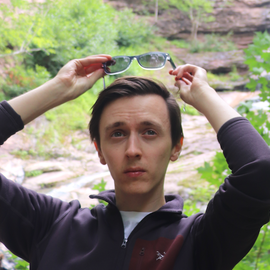