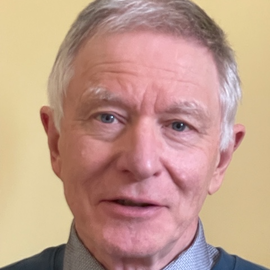 Richard Richardson, PhD, is a principal research scientist in the Radiobiology and Health Branch of CNL, Chalk River, Ontario. For his PhD he assessed the risk of leukemia from naturally occurring alpha-emitting radon gas. Since starting at CNL in 1993, he has published extensively on internal dosimetry or radionuclides including tritium. In 2016, Richard and Mary-Ellen Harper developed a novel explanation of the ‘oxygen effect’, important in radiotherapy, which is based on mitochondrial generated reactive oxygen species. He has published well-cited reviews of ionizing radiation and aging, and on the development of posterior subcapsular cataracts in 2020.

Currently, Dr. Richardson is the principal investigator for three major research projects at CNL including assessing methylation and mitochondrial biomarkers in Canadian residents exposed to radon and investigating the biological mechanisms associated with radiation-induced cataracts. A publication in 2021 described the stages of different cancer types based on U.S. data. Dr. Richardson has authored over 80 peer-reviewed articles available on ResearchGate and Google Scholar.

Richard collaborates with the Kildea Lab as an adjunct professor of the Medical Physics Unit at McGill University and joint PhD supervisor of a CNL employee. The collaboration is particularly active on a CNL-funded project assessing the radiation quality of neutrons using the retired NRU reactor, californium-231, and the ZED-2 reactor.