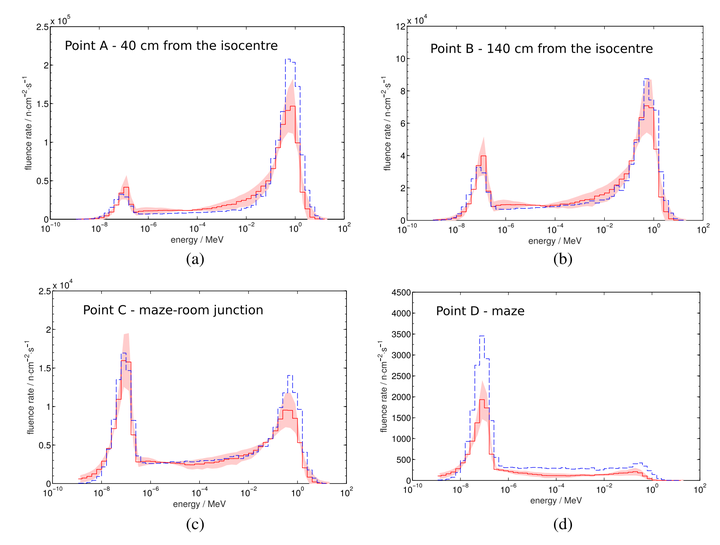 Purpose: Out-of-field neutron doses resulting from photonuclear interactions in the head of a linear accelerator pose an iatrogenic risk to patients and an occupational risk to personnel during radiotherapy. To quantify neutron production, in-room measurements have traditionally been carried out using Bonner sphere systems (BSS) with activation foils and TLDs. In this work, a recently developed active detector, the nested neutron spectrometer (NNS), was tested in radiotherapy bunkers. Methods: The NNS is designed for easy handling and is more practical than the traditional BSS. Operated in current-mode, the problem of pulse pileup due to high dose-rates is overcome by measuring current, similar to an ionization chamber. In a bunker housing a Varian Clinac 21EX, the performance of the NNS was evaluated in terms of reproducibility, linearity, and dose-rate effects. Using a custom maximum-likelihood expectation–maximization algorithm, measured neutron spectra at various locations inside the bunker were then compared to Monte Carlo simulations of an identical setup. In terms of dose, neutron ambient dose equivalents were calculated from the measured spectra and compared to bubble detector neutron dose equivalent measurements. Results: The NNS-measured spectra for neutrons at various locations in a treatment room were found to be consistent with expectations for both relative shape and absolute magnitude. Neutron fluence-rate decreased with distance from the source and the shape of the spectrum changed from a dominant fast neutron peak near the Linac head to a dominant thermal neutron peak in the moderating conditions of the maze. Monte Carlo data and NNS-measured spectra agreed within 30% at all locations except in the maze where the deviation was a maximum of 40%. Neutron ambient dose equivalents calculated from the authors’ measured spectra were consistent (one standard deviation) with bubble detector measurements in the treatment room. Conclusions: The NNS may be used to reliably measure the neutron spectrum of a radiotherapy beam in less than 1 h, including setup and data unfolding. This work thus represents a new, fast, and practical method for neutron spectral measurements in radiotherapy.